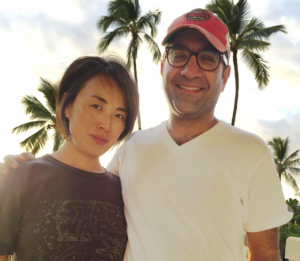 Ramin Erfanifar grew up in Victoria, where much of his formative high school years were spent doing what most high school students do — prioritizing social skills at the expense of academics. “I was a bit of a wayward youth,” he says with a smile. “I didn’t know what I wanted to do, outside of being with friends. I was always looking for something.” After graduation, rather than seek out a post-secondary institution to attend, Ramin travelled to Europe — first to see his sister in Romania, then off to Israel. “I am Bahá’í. I left my stay in Romania to go do volunteer work at our spiritual centre, the Bahá’í World Centre in Haifa, Israel. I had an amazing time there. It was highly transformative for me.”

While volunteering one night as a security guard at the world-renowned gardens, he had something of an epiphany. “I had this awakening — this very spiritual experience. It was two or three in the morning and the only movement was from all the fruit bats diving at me. It was just me and the bats. I was alone, but for the first time in my life I felt comfortable alone … I started reading a lot there. I would sit for hours by the sea reading and having these moments of meditation. I’d never had that before.”

Shortly after the night in the garden, he met up with an old friend who shared that he had been working at the Hague as a prosecutor. From that inspiring conversation, came Ramin’s decision to study law. After returning to Canada, he earned his undergrad degree at the University of Victoria, then his law degree at the University of Manitoba. The University of Victoria was where he met Noriko in 1999. The couple married in 2006 and have two children. “Noriko graduated with a marketing degree, but once we had kids she stayed home. Three years ago, she went back to school and finished the educational assistant program at Langara. Now she’s doing this amazing work helping children who have special needs.”

Ramin’s career in law began at a small firm in Victoria, followed by a larger firm in Victoria, then moved in 2014 to work at a boutique firm in Richmond. “Moving from one firm to another wasn’t making me happy. I would sometimes find myself living vicariously through my clients because I love business almost as much as I love law. I needed to start my own practice.” Ramin opened Erfanifar Law Corporation seven years ago. “When I was working for others, there were so many constraints and expectations – some of those were real and some artificial. When I started my own firm, I thought back to that time in the garden, about when my perspective on life began to change, and I knew the kind of practice I wanted to build — something less transactional, something that allowed me to focus on connecting with my clients, understand their needs, and build lasting relationships.”

When asked what advice he would give young people considering their career choices, he says: “My advice to young people (including my own kids) who are considering career options is to think about what you love to do that can also benefit others in your community. I believe that if we combine our passion in life with specialized skill and be service-oriented to our community then we’ll have a truly fulfilling career.” As an advocate of a healthy work/life balance, outside of work, Ramin enjoys spending time with family and friends, mountain biking, swimming, soccer (playing and coaching), skiing, and cars — specifically older European sports cars. “I have this ’89 Porsche 964 and I do a little amateur racing with it. I redid the interior myself — put in bucket seats and a roll cage. It’s a full racing car now and I take it around the track every so often. It’s quite addictive having to be so focussed.”

Ramin joined Terminal City Club in 2015. “I really had no interest in joining an exclusive club, but a friend who knew I needed more exercise told me about “this fantastic place with a fantastic pool.” So, I came for a visit and was immediately impressed with both the staff and members.

“My health was the reason I joined, but it’s grown into this entirely other thing — it’s a place for my family to come, a place for amazing conversations and great food. It’s become a home away from home.”