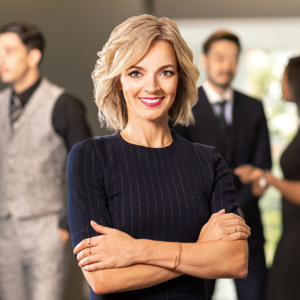 Nicole Porter is the founder of Nicole Porter Wellness — a five-year-old company that was recently named one of the top 10 corporate wellness service providers in Canada for 2023 by Manage HR Canada. Leading up to this remarkable achievement, Nicole’s career path was something of an adventure — maybe unpredictable or risky to those on the outside, but always with a purpose. “I think I’m like my dad,” she says with a bit of a laugh and whole lot of pride. “We’re not scared of taking risks.”

Nicole grew up in Saskatoon, then moved to Vancouver in the early 1990s to attend UBC. Although her first job was in the fitness industry at 16 years of age, her first career was in tech recruitment. Her second opportunity was with a software company where she quickly ascended the corporate ranks from marketing coordinator to operations manager to COO.

When the software company closed, she got into the world of advertising, one of her passions, selling radio advertising at Z95. “I never pictured myself in sales, but as it turned out, I was able to be more of a consultant, helping the businesses grow, and I loved it.”

It was then, while working at this prestigious, satisfying six-figure media sales job, Nicole did the most remarkable thing: She quit and moved back to Saskatoon to go back into dancing – tap, jazz, ballet, and musical theatre. Her Sales Manager at Z95 thought she was crazy. Nicole just thought it was unfinished business.

“I’ve tried to live life so I have no regrets. I quit competitive dancing when I moved to Vancouver, and it was something I felt like I never finished. So, I went back to get it out of my system, and I’m so glad I did. No regrets.”

When Nicole returned to Vancouver in 2002, having shuffled her dance ambitions to the side, she immersed herself in the burgeoning world of brand integration and product placement in TV and film. “It was still relatively early days for brand integration and advertisers were having a hard time understanding how something like this would be as effective as traditional advertising. I worked closely with clients educating them on the opportunities and benefits.”

In 2008, she started her first company, Shift Brand Integration Group, which led to producing the world’s first cross-platform wine and food series, airing on TV, airlines, iTunes, and other media. “I’m a fan of advertising that educates. I don’t want you to buy something just because it’s the most expensive or the cheapest or because of the marketing on the label. I want you to be informed. This educational strategy builds trust in the consumer, and ultimately, it increases sales.”

But in 2016, Nicole decided to do what she originally had planned when she moved to Vancouver – she started a wellness company. She sold her condo, returned to school, and in 2017, she opened Nicole Porter Wellness. “The company helps busy stressed-out professionals understand and overcome the top 10 unhealthy habits that add hidden stress to the body and mind and ultimately keep them from optimal health, mindset and productivity.”

A few of these unhealthy stressors include nutritional stress, imbalanced exercise programs, poor sleep, and excessive screen time. “These habits can wreak havoc on the body.”

“All the different work I had done — tech, media, sales, education, public speaking — these jobs gave me the tools I need to develop and build my own brand rather than someone else’s brand. My mom always said, ‘do what you love’, and I do. This is exactly what I’m meant to do.”

Nicole joined Terminal City Club three years ago. At the time she was attending a regular meeting of a networking group that met at the TCC, and one of the members in the group urged her to join.

“I remember telling Jennifer Silver [TCC Director of Membership and Marketing] that the membership was for business, that it had to pay for itself. Little did I know that the friendships I was about to make would be invaluable. I love this place. In fact, I told my mom the other day, the only regret I have about joining Terminal City Club is that I didn’t join sooner.”